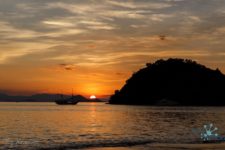 Since March 1980, Komodo has been declared as National Park and the official protection began. This area was subsequently extended to 219,322 ha in 1984 to include an expanded marine area and the section of mainland Flores. Komodo Biosphere Reserve was accepted under the UNESCO Man and the Biosphere Programme in January 1977.

Initially the main purpose was to conserve the unique Komodo Lizard (Varanus komodoensis) and its habitat. These giant lizards exist nowhere else in the world. Most commonly known as “Komodo Dragons” they show evolutionary implications and aggressive behaviour.

In addition, the Park includes one of the richest marine environments including coral reefs, mangroves, seagrass beds, seamounts, and semi-enclosed bays. More than 1,000 species of fish, some 260 species of reef-building coral, 10 types of dolphins, 6 types of whales, green turtles and various types of sharks and stingrays inhabit Komodo National Park.

Today, PKA Komodo National Park Office and the company PT. Putri Naga Komodo are working together to protect the biodiversity of the Park (both sea and land).

(Note: all time and quantity specifications have been extracted from official, existing sources on the internet, among other things websites of unesco.org, komodonationalpark.org, Indonesia.travel)