In just an hour east of Bali

Flores and Komodo are two islands in Indonesia and are located in the province of East Nusa Tenggara (NTT). Nusa Tenggara consists of the five larger islands of Lombok, Sumbawa, Flores, Sumba, the western half of Timor and several smaller islands around them. Flores Island is the gateway to the Komodo National Park, and Komodo Island is a part of the Komodo National Park.

Indonesia is the world´s largest archipelago, stretching across three time zones along the Equator, and including some 17,000+ islands. Indonesia is undoubtedly the dream destination for those who love rainforests, landscapes formed of mountains or fields, exotic culture, distinct traditional architecture, wildlife, open and friendly people and amazing diving. 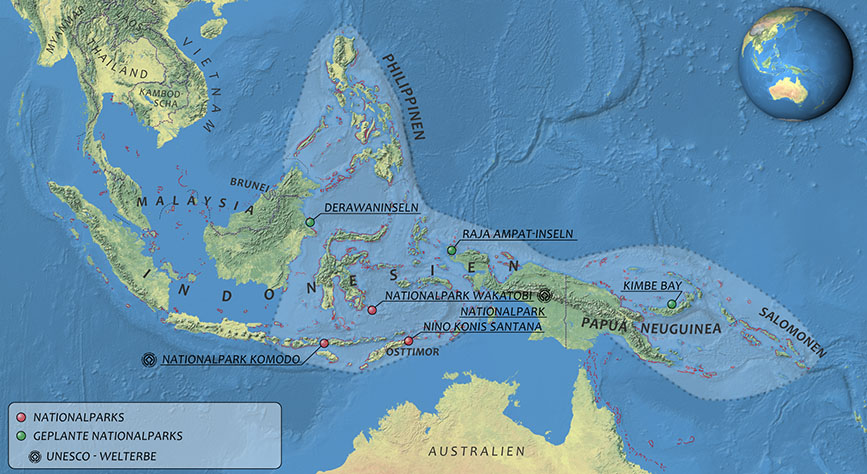 Indonesia forms part of the so-called Coral Triangle, the global centre of marine biodiversity. Named for its staggering number of corals (nearly 600 different species of reef-building corals alone), the region nurtures six of the world’s seven marine turtle species and more than 2000 species of reef fish (source WWF). The straits separating the islands in East Nusa Tenggara have some of Indonesia’s finest coral reefs such as in Komodo National Park, while wildlife on land includes the famous Komodo Dragons.

In addition, Indonesia holds World’s highest number of active volcanoes, some 145 of them. 17 volcanoes are located on the Flores Island, and can be visited as some of them are easy to ascend, such as Kelimutu Volcano with its three crater lakes.

The diversity among these 17,000-something islands is astonishing. Over 700 ethnic groups call Indonesia their home. Many of Indonesia’s most traditional ethnic groups are on the islands in East Nusa Tenggara.

Flores is a less visited island in Indonesia, but that has much more to offer: volcanoes, traditional villages, caves, coffee plantations, ethnic ikat weavings and splendid beaches.

Komodo National Park most famous for Komodo dragons is a World Heritage Site, the best place to see wildlife in this region, and one of the best dive destinations in the world.

We are happy to invite you to discover these beauties together with us.