Komodo National Park is home to Komodo Dragons, various types of birds and mammals, grassland savanna, tropical sand beaches, and is one of the world’s best dive sites.

Just 1-hour flight from Bali located between the island Sumbawa and Flores lays the Komodo National Park with its three main islands, Komodo, Rinca, Padar, and several smaller ones. The flora and fauna here are some of Indonesia’s finest. The Park inhabits one of the richest marine environments including coral reefs, mangroves, seagrass beds, seamounts, and semi-enclosed bays. More than 1,000 species of fish, some 260 species of reef-building coral, 10 types of dolphins, 6 types of whales, green turtles and various types of sharks and stingrays are living in Komodo National Park. 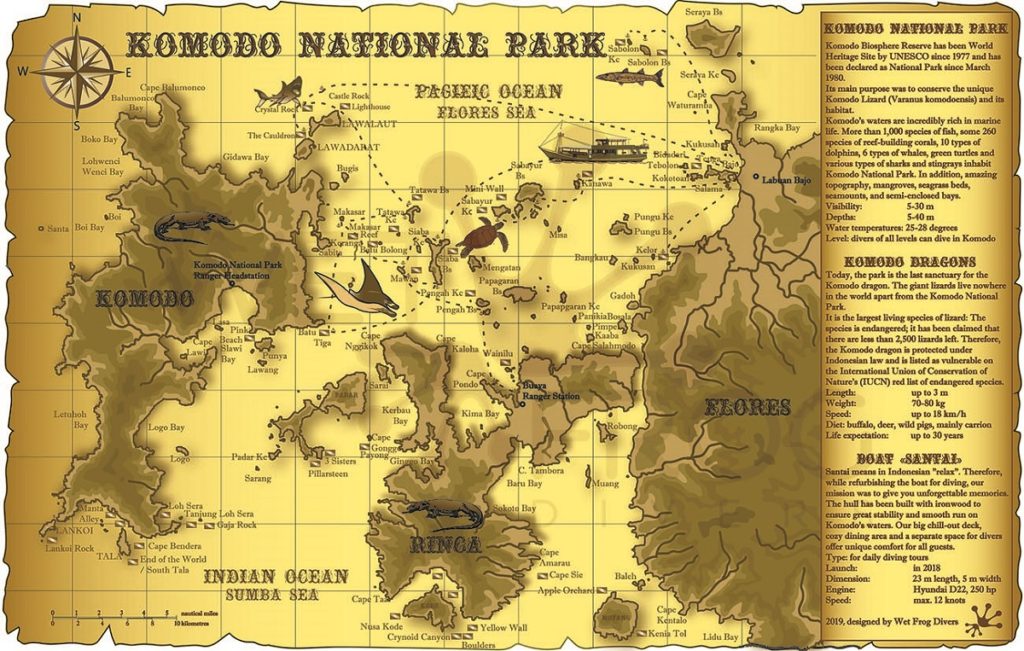 The islands of Komodo, Rinca and Padar are the only islands in the park accessible to tourists. They can only be reached on a boat starting from the harbour town Labuan Bajo on Flores Island. You can fly to Labuan Bajo directly from Jawa or Bali.

Starting from Labuan Bajo on our boat we bring you to the amazing dive spots in Central and North part of Komodo National Park, and encounter the unique Komodo Dragons on the Island of Rinca.

On our beautiful boat we offer tours both for diving and snorkeling. During our daytrips our guests enjoy swimming in turquoise waters, walking on white sand beaches, diving with mantas and other oceanic giants, relaxing on our spacious sundeck, tasting the freshly prepared Indonesian food, chilled drinks and tropical fruits.

Discover the undiscovered world, experience the unique diversity and meet the rare wildlife.

In March 1980, the area has been declared as National Park. This area was subsequently extended, and in 1984 it also included an expanded marine area and the section of mainland Flores. Komodo Biosphere Reserve was accepted under the UNESCO Man and the Biosphere Programme in January 1977. Today, the park serves as a protected area for the last Komodo dragons in the world as well as for some plant species and for the underwater world of the region. Off to Komodo National Park for diving, to discover the undiscovered world, to see the unique diversity and to meet rare wild animals. Send us an email, we look forward to you

Diving and Snorkeling in Komodo

“Occupying a unique position at the junction of the Australian and Asian submarine ridges, between the two distinct fauna regions marked by the Wallace Line, here [Komodo National Park] is one of the world’s most dynamic marine environments with nearly every species of coral and tropical fish represented.” – Indonesia Tourism.com, official webpage.

This sentence says it pretty much all. We can only add to this “Yes, it’s absolutely true!” Of course, we could also add that it is one of the richest marine environments; that Komodo’s dive sites are superlative; that Komodo’s currents bring lots of big fish; that it is home to more than 1,000 species of fish and we could go on and on.

You probably will be happy to know that you can do scuba diving in Komodo the whole year around; yet bear in mind, there is rainy season between December and March thus the visibility could drop. However, the chances to see manta rays increase.

And don’t worry if you are not a diver. First, you can always try scuba diving and become a diver while enjoying your training of Open Water Diver in the best waters of the world. Second, you can also enjoy snorkeling in many places in and around Komodo National Park.

We offer different day tours for divers and snorkelers. We can set your tour according to your wishes and combine diving and/or snorkeling with a trekking tour on the Rinca Island where you will encounter the famous Komodo Dragons.

In 1980 the Komodo National Park has been founded for the protection of the famous and endangered Komodo Dragons. Today, the park is the last sanctuary for the Komodo dragon. The giant lizards live nowhere in the world apart from the Komodo National Park and are, of course, the main attraction point for many tourists; yet also scientists are very much interested in studying the theory of evolution.

The Komodo dragon is the largest living species of lizard that can grow up to 3 meters and reach an average weight of 70-80 kg. Despite its weight and length the Komodo dragon can speed up to 18 kilometres per hour while hunting its food. The lizard’s diet include deer, buffalo, wild pigs and mainly carrion. It hunts and ambushes prey using its strong tail to bring its prey to the ground, hence to set a deep bite. The Komodo dragon has venom glands, which are loaded with toxins that lower blood pressure, cause massive bleeding, prevent clotting and induce shock. The prey dies of bleeding. Komodo dragons have an excellent sense of smell and can locate their prey from a distance of several kilometres.

Between May and August the Komodo dragon matures, and the eggs are laid in September. After seven to eight months – around April though – hatching begins. Young Komodo dragons hide from their predators and some cannibalistic adults on the trees. After eight to nine years they are mature and can live up to 30 years.

The species is endangered; it has been claimed that there are less than 2,500 lizards left. Therefore, the Komodo dragon is protected under Indonesian law and is listed as vulnerable on the International Union of Conservation of Nature’s (IUCN) red list of endangered species.

The Komodo dragon can be visited both on the Komodo Island as well as on Rinca. While visiting the dragons respect their living environment. No disturbance, no damaging, no rubbish on the island. Always follow ranger’s instructions and listen to his briefings. Guests are asked to pay an entrance and an observation fee before starting the tour.

We offer a combination tour of 2 dives (or snorkeling) and a visit on the Rinca Island.

A day full of impressive images and unforgettable memories.